Jessica Chamorro’s dream of owning her first home was upended in March after she was furloughed from her catering job at a hotel chain in Tampa, Florida.

She and her husband, who have three children, had just started their pre-approval process to purchase a home this summer when the pandemic hit. Now their plans have been put on hold after the hotel industry was battered by travel restrictions and lockdowns. They are currently stuck in a 1,000-square-foot rental that they had been staying in temporarily to stash money away for a down payment.

“I feel like the rug has been pulled out from under us,” Chamorro, 38, says. “Our goal was to get out. Now we’re stuck in this tiny house. It worries me because we were already living on top of each other to save money. I don’t know if I’ll even have a job to go back to.”

Like Chamorro, millennials and other younger Americans starting families and hitting their professional stride were poised this spring to achieve another milestone — buying their first home. Then the coronavirus hit, shuttering open houses, delaying deals, and causing would-be buyers to push pause as they worried about their health and the fate of their jobs.

Now, applications to buy a home are again on the rise as states lift orders to stay inside. But the pandemic has altered how residential property is bought and sold, changes that aren’t likely to disappear any time soon and that could reshape the American dream long after the current crisis has passed.

A growing number of Americans are considering fleeing cities for the suburbs, to put more distance between themselves and their neighbors. Video home tours, a trend that was already increasing, may become routine.

And rather than gathering in a courthouse or office conference room, more and more buyers and sellers are signing documents remotely instead.

“All the technologies we’ve built for visualizing a home and virtualizing the closing process will just keep growing in importance,” says Glenn Kelman, CEO of the national brokerage Redfin.

Online searches for housing in small towns are growing at nearly twice the rate as queries for major metropolitan areas, he says. “Prior to this pandemic, the housing affordability crisis was already driving people from large cities to small,” Kelman says. “Now more permissive policies around remote work, and a rising wariness about close quarters will likely accelerate that trend.”

The new reality will greet many of the buyers and sellers easing back into a thawing market.

Mortgage applications dropped 25% in April as compared to the month before, and were 12% below their total during the same month last year, as stay-at home mandates reached their peak, according to the Mortgage Bankers Association.

But millennials remain eager to buy a place of their own, experts say. And with interest rates hovering at 3.41%, a near record low, a housing rebound could start as soon as this summer. 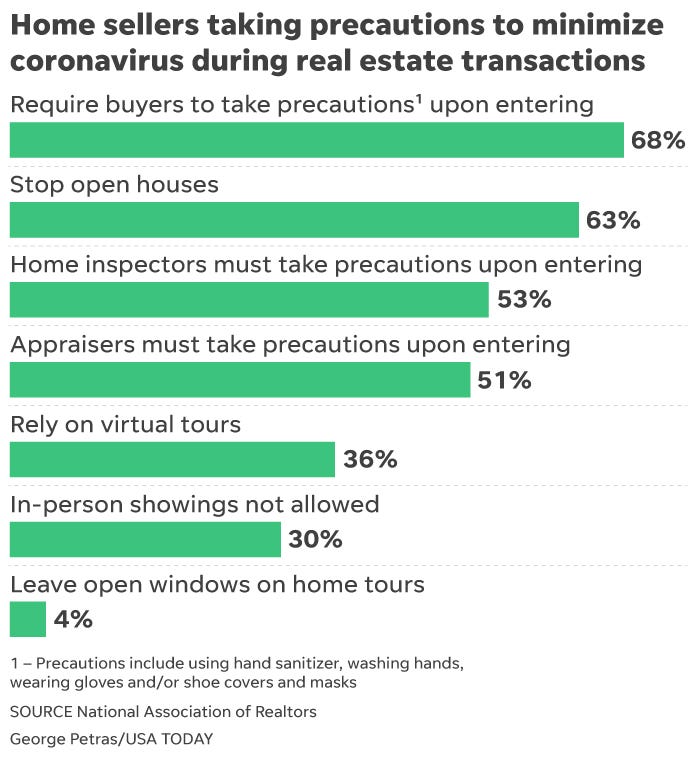 “You still have a lot of households at the point where they’re interested in home buying,” says Mike Fratantoni, chief economist for the MBA. “As some states have begun to reopen, we’ve seen a rapid pickup and … very strong growth in purchase applications. And now we’re running only about 10% behind where we were last year.”

In Texas, North Carolina and Georgia, purchase applications have actually risen in comparison to 2019. And Fratantoni expects home sales for all of 2020 to be only 2% below where they were last year.

“It all depends on how the pandemic evolves from here,” he says, but currently, the future of home sales is “looking really, surprisingly strong.”

The National Association of Realtors is slightly less optimistic about this year’s forecast, predicting home sales will be 10% to 15% lower than 2019.

But “sales will be higher by 15% to 20% in 2021 because more listings will steadily appear as the state economies steadily reopen,” says Lawrence Yun, NAR’s chief economist,

Head for the hills – or at least the suburbs

A growing number of those sales might be in less crowded communities.

A survey by NAR found that 5% of members said the coronavirus pandemic was causing their clients to shift their sights away from cities to the suburbs.

And 13% said the virus had made buyers prioritize a different home feature, such as a home office, or extra room where relatives could stay, as they considered what property to buy.

“Remote work will become more prevalent,’’ Yun said of the home buying landscape in the wake of COVID-19. “That means there is less need to be close to the job centers. Suburbs and exurbs (areas situated beyond the suburbs and in, or adjacent to, rural areas) will get a greater interest. In addition, a larger single-family home with extra elbow room will be desired, such as dedicated office space and a personal gym.”

Data from the Harris Poll found that almost a third of Americans are thinking about moving to less densely populated areas. And 43% of city dwellers had recently checked a real estate site for a house or apartment to rent or buy as compared to 26% of those in the suburbs, and 21% of those in rural areas.

But being able to afford a home, whether in the suburbs or downtown, may be a tall task for some millennials.

Despite an overall slip in home sales, the median home price has risen more than 5% as compared to last year, according to Yun, who noted that a shortage of available inventory has kept prices afloat.

And stricter lending standards also threaten to block many first-time buyers. JPMorgan Chase, for instance, now requires nearly all borrowers to put at least 20% down on a home, and it’s raised the required minimum FICO credit score to 700 on purchase mortgages.

That’s a steep climb for many buyers who typically put down between 3% to 5% on their first home, says Odeta Kushi, deputy chief economist at First American Financial Corporation.

General worries about the stuttering economy also could dash the hopes of some potential buyers.

Those who are able to buy a home may find that much, if not all, of the process has gone virtual.

Brokers have been able to use FaceTime and other platforms to give video tours of houses for years. But those tools became critical during the pandemic when sellers became reluctant to have strangers traipsing through their homes.

Among sellers with active listings, the NAR survey found 68% wanted prospective buyers to use hand sanitizer, to use coverings for their shoes and face, or to wash their hands before entering their homes. When it came to home inspectors, 53% of sellers wanted them to take similar safety measures.

Brokerages like Redfin, which has offices in more than 90 metro areas across the U.S. and Canada, canceled open houses as the coronavirus crisis escalated. And video walk-throughs became a common substitute for in-person visits.

Van Fletcher, a broker/realtor with Allen Tate Realtors in Raleigh, North Carolina, was able to continue taking his clients, Liz Stokley and Ryan Stephens, on virtual tours, even as the couple stayed put in Baltimore.

The married millennials, who intend to relocate to Raleigh, started their housing search in person in January. But they postponed a follow-up trip in March because they didn’t want to fly in the midst of the pandemic.

“So we started doing video tours with Van,” Stokley said. “We felt very lucky that he was willing to go into these houses.”

NAR’s May survey found that among members who had a buyer put a contract on a home that week, 22% said the purchaser had only seen the property virtually.

Many buyers may continue conducting the bulk of their search via a computer screen.

“For many home buyers today, the home search process starts online,” says Fratantoni. “Greater use of online resources, less driving around, I think that’s definitely the trend we’re on.’’

“Nothing will replace the experience of walking through a house and property,” Elwell says. “I can see buyers looking at more houses online and weeding out what they don’t like, resulting in fewer in-person visits.”

Buyers and sellers may also increasingly complete their transactions online.

While 24 states have legislation that allow documents to be notarized remotely, 19 more passed executive orders to enable online signings after the pandemic hit, according to the Mortgage Bankers Association.

Georgia is among the states to at least temporarily allow notaries to review paperwork with buyers and sellers on platforms like Zoom. Documents are mailed in afterward to get the official stamp.

“This is an enhancement to the process that the industry has been working towards for several years,” said Fratantoni. “It’s certainly needed in this kind of crisis but … once people get used to the idea of not having to physically attend a closing, I think that might just become part of a new normal.”