San Francisco is the softest spot in the Bay Area’s mostly booming real estate market, and its condo segment is weakest of all.

Inventory has been growing faster than sales, and price reductions — mostly in the condo segment — “have hit very high numbers,” said Patrick Carlisle, chief market analyst for the Compass real estate brokerage firm. So why hasn’t the median price for a San Francisco condo shown a bigger drop?

The big reason condos didn’t drop more: Sales of two-bedroom units went up considerably — to 330 from 230 — year over year, while the number of one-bedroom condo sales dropped slightly, to 186 from 183. 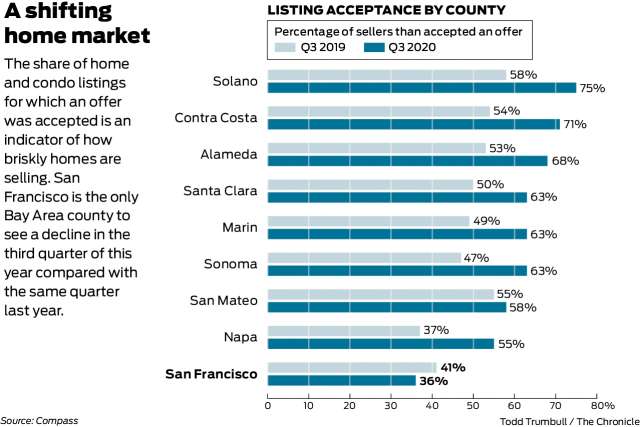 “The increase in two-bedroom sales pulled up the overall median condo sales price,” Carlisle said. When you look at one- and two-bedroom units separately, their median prices fell 6.6% and 6.5%, respectively, “which rings much truer.”

This shows why looking just at median prices, the point at which half of homes sold for more and half for less, can be misleading.

Carlisle found “a similar dynamic regarding median house sales prices around the Bay Area in the third quarter.” The average size of homes sold in the Bay Area in the third quarter “jumped virtually everywhere, very generally in the 5% to 10% range. Bigger houses sell for more money, raising the median sales price.” That’s not a true reflection of market values, or what an individual house might sell for.

Although market values did go up in most areas, “a significant proportion of median price increases were simply due to bigger houses selling,” Carlisle said. “Affluent buyers have been playing a larger role in the market since the pandemic.” His data is based on sales reported to a Multiple Listing Service. 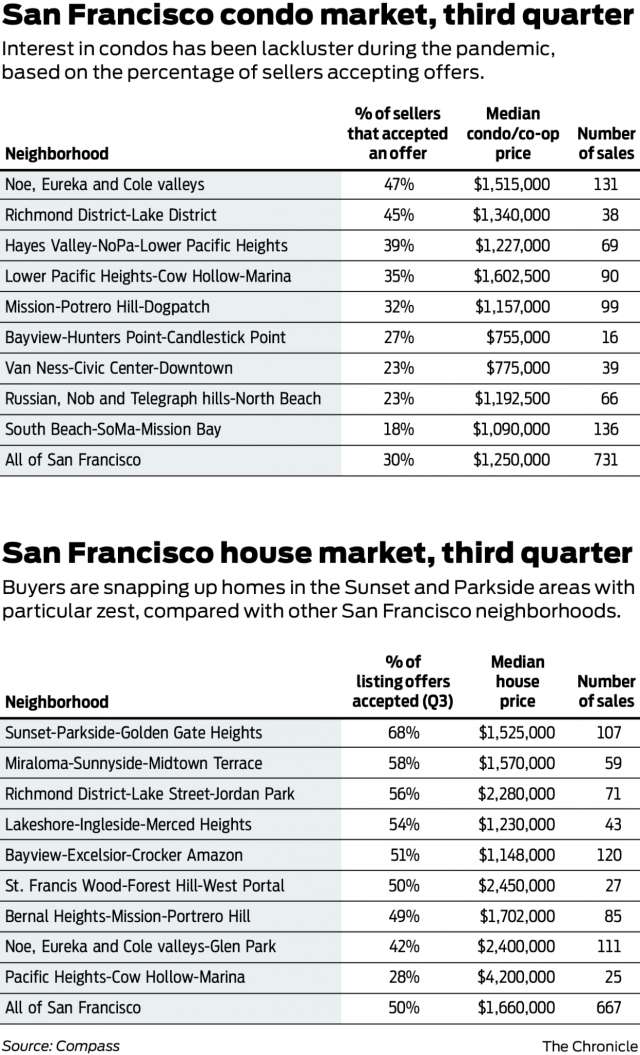 Even in a soft market, buyers are facing stiff competition in some segments. One way to measure “hotness” is by looking at the percentage of homes that go into contract, meaning the seller has accepted an offer. By this measure, the hottest condo markets in San Francisco in the third quarter were Noe/Eureka/Cole valleys (47% percent acceptance rate), followed by Richmond District/Lake Street (45%).

For single-family homes, the hottest San Francisco neighborhood was Sunset/Parkside/Golden Gate Heights, where 68% of homes went into contract in the third quarter. The coolest was Pacific Heights/Cow Hollow/Marina (28%).

Another measure of hotness is the average amount by which the sales price exceeds the original list price, also known as overbidding. Here too, Sunset/Parkside district led the way for single-family San Francisco homes, with buyers paying 9% on average more than the list price in the third quarter. The coolest was Pacific Heights/Presidio Heights/Cow Hollow/Marina, where the average buyer paid 4.6% less than asking.

Sunset/Parkside “is extremely hot,” said agent Jason Chan of Barbco Real Estate. “I’ve been getting on average 10 or 20 offers on my listings (there). They are usually going about 40% over asking.” He admitted that agents in the city are pricing homes well below market value because if they price them at market value or slightly above, “they end up sitting on the market for weeks or months.”

Compass agent Yesenia Rogers said Sunset/Parkside is a good alternative to the suburbs for people who are mostly confined to their homes during the coronavirus pandemic and want a yard and space for an office or classroom. “It’s where you can get a single-family home in that $1.5 million range that’s going to allow for space, three bedrooms, a backyard, in a nice, safe community,” she said.

Rogers is working with three buyers who are “actively writing offers” in that area. All are renting condos and want single-family homes for children at some point. “These are people who believe in San Francisco, believe the city is going to come back, and maybe not the way it once was, but San Francisco does remain a good investment.” Some want to stay close to relatives in the city.

This past week, her buyers bid on one house that got 12 offers and another that got 20. “There is a lot of inventory on the market” in San Francisco, and sales “are pretty hot and cold,” Rogers said. “I don’t think (the Sunset) is an area where you will constantly get beat out. But compared to other parts of the city,” it’s competitive, she said: Homes with three bedrooms on one level “will see a lot of offers.”

Surprisingly, some parts of the Bay Area that have been hardest hit by wildfires and power shut-offs were among the “hottest” in the third quarter.

Carlisle compared the percentage of homes (single-family and condos combined) that went into contract during the third quarter of 2020 to the same quarter last year for the Bay Area and a few surrounding counties.

In the third quarter of this year, by itself, the counties with the largest percentage of homes going into contract were Solano, Contra Costa and Alameda.

But the counties that saw the biggest percentage change in this number year over year were Monterey, Santa Cruz, Napa and Sonoma. This is another way of measuring hotness.

“San Francisco is the only county that saw a decline,” Carlisle said. Its share of homes accepting an offer dropped from 41% last year to 36% this year.