The coronavirus pandemic and struggling economy couldn’t keep a lid on Bay Area home prices, which hit new records in 2020, according to a new report.

The median price for a single-family home in the Bay Area was $1.06 million in December, a slight decrease from November but a 16.4% increase from December 2019, according to a report from the California Association of Realtors released this month. Sales were up 40.2% in the region from 2019, according to the report. 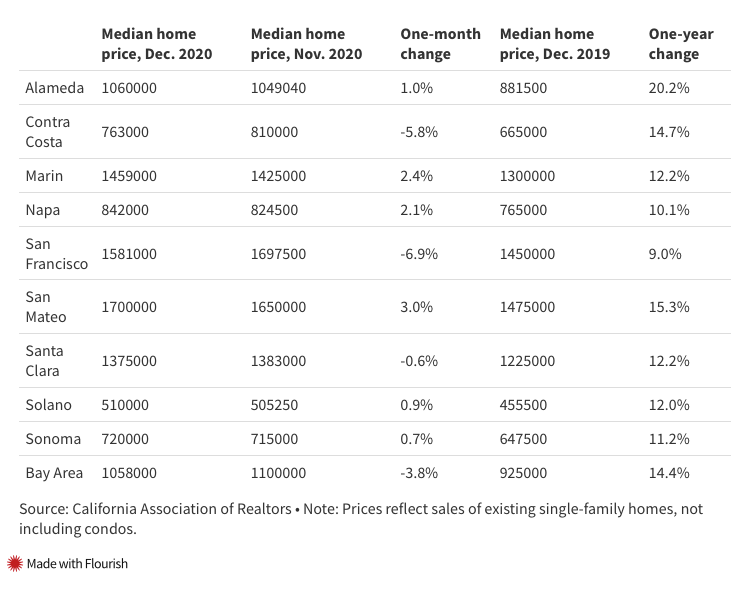 The median refers to the middle price for all homes in a set, where half sold for less and half for more.

California’s median home price in December reached a record $717,930, a 16.8% increase from December 2019. Active listings fell 47.1% from 2019, a figure the report attributed to homeowners’ wariness to sell during the pandemic. Coupled with low interest rates on mortgages, the decrease in supply helped drive prices up, according to Realtors association Chief Economist Jordan Levine.

“Home prices, which usually peak during the summer, were unseasonably strong in December,” he said in a news release accompanying the report.“The imbalance between supply and demand continues to fuel home price gains as would-be home sellers remain reluctant to list their homes during the pandemic.”

The 30-year fixed mortgage interest rate dipped to 2.68% in December, down from 3.72% last year, according to the report.

“Home sales should remain elevated into the first half of 2021, as motivated buyers take advantage of the increased purchasing power,” he said.